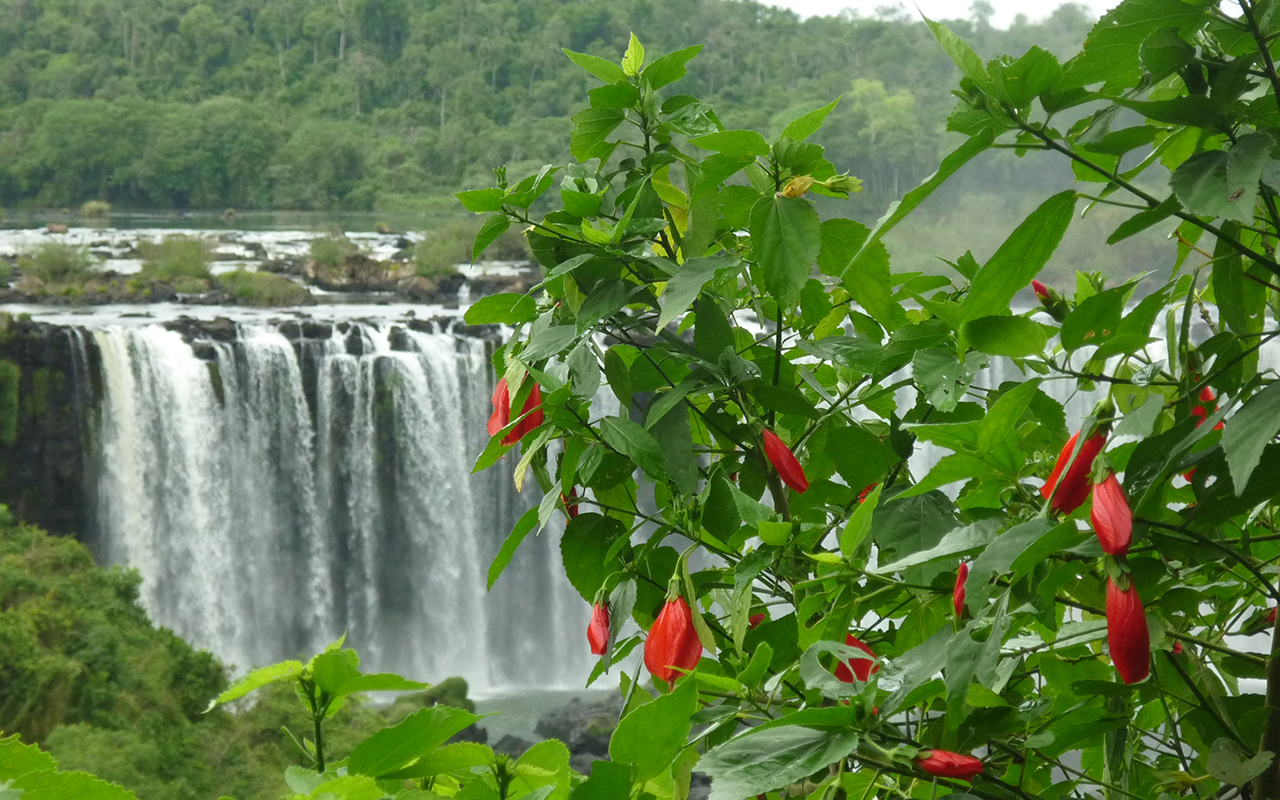 Idea for an itinerary travel in Argentina in 18 days.

Drive around the deserts of the Calchaquies valleys around Salta, on the footsteps of the pre-inca civilizations and colonial heritage. Explore the multicoloured mountains carved by centuries of erosion, the cacti, vineyards, and small andean villages.

Then fly east and leave the deserts to enjoy the lush tropical climate of Iguazu Falls and the hidden, secret natural sites of Mocona and Cuña Pira.

Get your personalized quote.

Did you like this route? Our travel designers will adapt it to your profile and send it to you within 48 hours. 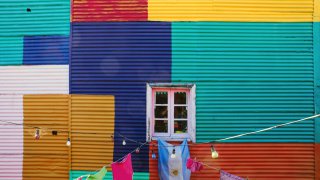 Meet your driver at Ezeiza International Airport – transfer to Buenos Aires in a private vehicle.

Today, discover the political and historical centre of the capital. Start with the 9 de Julio Avenue, the widest in the world, dominated by the Obelisk, a symbol of Buenos Aires. You will pass the Colon Theatre, one of the jewels of the Argentine architecture, before arriving on the Capital main square, Plaza de Mayo.

Your visit then takes you to San Telmo: this historical neighbourhood is a dynamic mix of tourists and locals: picturesque alleyways, old typical cafés, antique shops… This lively barrio is animated day and night – a famous flea market takes place every sunday around Dorrego square.

End your visit with the picturesque neighborhood of La Boca, with its small alley of El Caminito : painters, tango dancers and singers meet between the ancient colourful wooden houses.

Return to your hotel after the visit

Night at the Cassa Lepage Hotel in standard room. 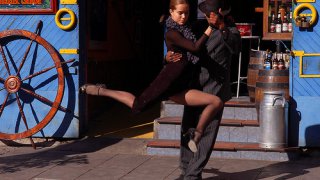 Visit the Recoleta neighbourhood, characterized by many colonial houses, currently inhabited by powerful Argentine families. Enter the luxurious Pacifico Shopping Center with its typical 1889 French architecture with vaulted ceilings. This stunning place is a locals’ favourite.

Visit the Recoleta Cemetery, where many celebrities, writers and politicians rest. The most famous and revered even today is the tomb of Evita Peron, the legendary wife of President Peron.

Continue your visit in the Palermo neighbourhood, with leafy streets, small eateries and little shops, and take a stroll in the Tres de Febrero park inaugurated in 1875, the largest green area of the city.

Return to your hotel.

Night at the Cassa Lepage Hotel in standard room. 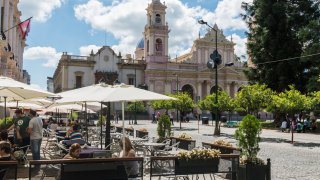 Transfer from your hotel to Buenos Aires Domestic Airport in a private vehicle.

*National o international airport depending on time schedule and availability.

GPS included Pick up rental car in the airport

Salta is the capital city of the province of the same name and it is located at 1,187masl, at the foot of Mount San Bernardo. The city was founded in 1582 by Hernando de Lerma. Both colonial-style houses and modern buildings coexist harmoniously.

Visit the historical sites such as the cathedral, built in the 19th century, the San Bernardo convent and the Cabildo, which houses the picturesque historical museum the northern regions.

Night at the Delvino Boutique Hotel in standard room. 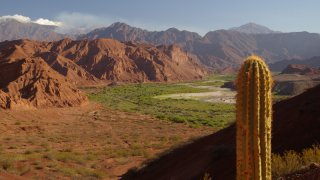 Drive through spectacular landscapes such as those offered by the Piedra del Molino mountain pass at 3,600 meters, the Quebrada de Escoipe, a deep gorge where the green woods contrasts with the ochre-coloured soil of the bare mountains of “Cuesta del Obispo” and Los Cardones National Park. The stark expanses of land are scattered with candelabrum-shaped cacti…

Cachi is a quiet Andean native village featuring low-whitewashed houses and the San José Church with its sculpted roof of cactus-wood dating back to the 18th century. Visit the small archaeological museum which has a wonderful collection of pre-Inca and Inca ceramics, especially those pertaining to the Santa María culture. 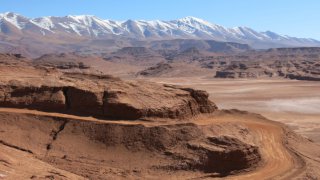 Drive to the small town of Molinos founded in 1659; the 18th century church, was built by the last royal governor of Salta, Don Nicolás Severo of Isasmendi, buried there. The town grew around it.

Cross the spectacular Quebrada de las Flechas surrounded by a mysterious moonscape. White dunes signal you are getting close to Cafayate, the largest city in the valley of Calchaquies, whose economy relies on the wine industry. Visit the bodegas and enjoy a little wine tasting in the evening. 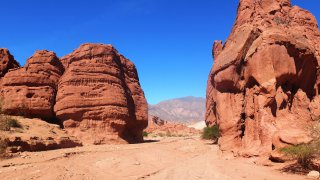 Leave Cafayate to visit Quilmes, former fortified stronghold of the Inca era; at its peak, it gave shelter to over 3,000 people resisting Spanish evangelization and military conquest. The town and its intricate structure were built by terracing the hill slopes. Tour the site.

Drive on until the “Quebrada de las Conchas” valley which offers one of the most spectacular landscapes of Northwest Argentina, with its high semi-desert mountains featuring multi-colored rock formations sculpted by hundreds of years of erosion. 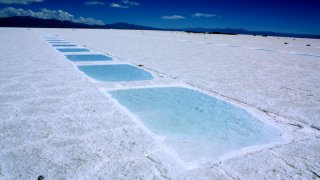 Leave Salta to reach the small town of Purmamarca, which means holy land in Aymara. This village is famous for its 7-coloured mountain literally called Cerro de los 7 colores, a sort of mineral rainbow best admired at dusk or dawn for better contrasts.

Follow the N.52 Road to visit Salinas Grandes – you reach an extensive white patch of land that stands out against the blue sky: you are in the middle of one of Argentina’s biggest salt desert (12 000 hectares). You may spot some vicunas.

Drive back to Purmamarca for the night. Night at Los Colorados Cabanas Boutique in Superior Bungalow. 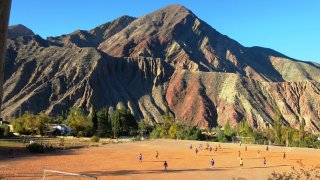 Leave in the early morning to cross the Humahuaca Quebrada. Start with a visit in Pucará de Tilcara, a pre-Hispanic Omaguaca village founded over 900 years ago. The museum has a remarkable collection of mummies, funeral vases, jewellery and other objects found in the Northwest archaeological sites.

Drive north to Uquia and then Humahuaca, located at 2940masl, one of the main trading site under the Vice Regency of Peru. Walk around the small streets, visit the church and the baroque sculptured in the main square.

Drive back to Salta via San Salvador de Jujuy in the late afternoon. 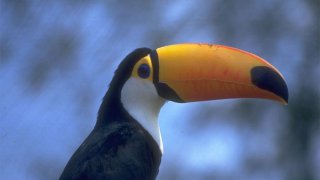 Relax by your hotel’s swimming pool to cool down from the tropical weather.

For nature lovers, go visit the Jardin de los Picaflores: in a private garden, a local family has been taking care of hummingbirds – a wonderful opportunity to watch these small, colourful animals.

Go visit the Hito Tres Fronteras, a monument celebrating the triple border between Argentina – Brazil – Paraguay, or one of the many natural reserves, some of which are close to the city but already immersed in the tropical nature. Night at La Aldea de la Selva Lodge – standard room. 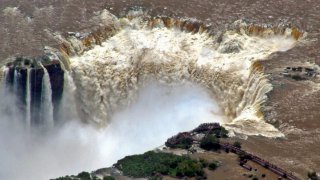 Set out to the argentinian side of the Iguazu Falls this morning – the park is located 18km away. Follow the upper trail which offers panoramic views of the Bosetti, Mbiguá and San Martín falls. Move on to the lower path to discover Dos Hermanas Falls and the San Martín Island.

The Garganta del Diablo trail towers over the Devil’s Throat , an 80-meters high and 150-meters long waterfall. This impressive waterfall, shrouded in a dense mist, is one of the main attractions of the National Park, home to intense animal life and lush vegetation. 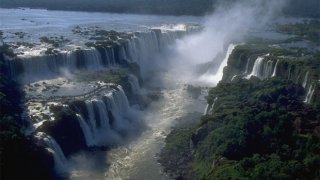 Departure to the Brazilian side of the Iguazu Waterfalls.

Follow the 1,200m trail over boardwalks and panoramic decks to admire the Floriano and Teodoro Da Fonseca falls.

The visit culminates at the Santa María falls, which offer a breathtaking panoramic view over San Martín Island and your surroundings. 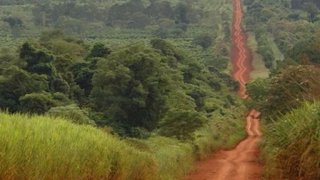 This morning, leave Puerto Iguazu to reach Comandante Andresito: the lush paranaense forest borders the typical red dusty trails. The biodiversity of the region is one of America’s most diverse.

You will spot many trucks filled with Yerba Maté along the road from april to august: this native plant, originally gathered by the Guarani indians in northeast Argentina, is used to make the typical mate so dear to Argentinian people. Traditionally served in a small gourd, mate is drunk through a metal straw, and passed on from hand to hand between friends or family.

The trails passes by small villages lost in the forest before you reach Surucua lodge. Your host Adrián will propose various activities to choose from, depending on the season and weather conditions (in English or Spanish):

– Bird watching and nature photography. Among the most significant species, you will find Surucua Trogons, band-tailed Manakins, Araçaris…

– Hikes in the Parana forest

– Kayaking – navigation on the Iguazú river…

Night at the Surucua Lodge – standard room, full board. 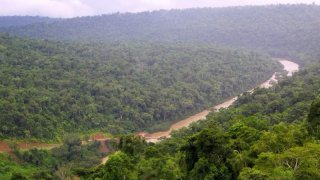 Leave Surucua Lodge to head east. The famous 101 road passes by numerous reserves and natural parks, famous for their well-preserved fauna. Continue to El Soberbio, a charming little town, with an interesting and exotic aroma museum. We recommend the Yasi Yateré Reserve on your way (6 USD entrance not included): a fascinating introduction to the numerous edible species cultivated locally (tropical fruits, coffee and yerba mate plantations, aromatic crops), and a short visit to the native jungle where several endangered species are found. The guided walk lasts approximately two hours, with a local guide – walks are short and easy.

You reach your hotel near the Mocona Falls in the middle of nature. Arrival at the Mocona Virgin Lodge located in the Yabotí Reserve, where you can explore the trails, natural waterfalls and enjoy some included activities supervised by a local English-speaking guide.

Night at the Don Mocona Virgin Lodge in a standard room 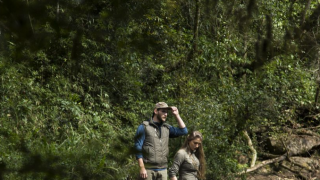 Choose among the several activities available at the Lodge:

– visit to the Mocona Falls (navigation not included)

Night at the Don Mocona Virgin Lodge in a standard room 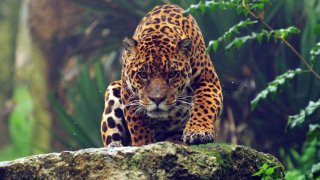 A few kilometers further, nature takes over. Several Guaraní communities are gathered around the Salto Encantado Natural Reserve. In the middle of the luxurious green forest, Salto Encantado (which means Enchanting Fall ) is the main attraction of the park, discovered in June 1936.

A Guaraní legend tells that Salto Encantado was born from the tears of Yate-í (Sweetness), a young Guaraní who fell in love with the son of the chief of the enemy tribe. Yate-í mourned the conflict between the two tribes so much that strings of water fell from her eyes and turned into the waterfall. Enjoy some last activities in the morning before leaving. Night at the Cuna Piru Lodge in a tree-hut, 8 meters above the ground.

(other options are available) 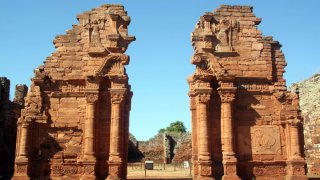 Drive to the town of Jardín América through the panoramic valley Cuña Pira.

You are back on the Yerba Mate Road, with the opportunity to visit some well-known Yerba Mate farms (Pipore, Las Marias…).

A few kilometers further on are the ruins of San Ignacio, living testimony of the works of the first Jesuit missionaries. The best preserved building is the church whose facade still stands. A guided path takes you back to the 17th century, explaining the rise and fall of the missions in this area.

Continue to Posadas. Drop off your vehicle at the airport. Domestic flight Posadas – Buenos Aires*.

*National o international airport depending on time schedule and availability. Transfer from Buenos Aires domestic airport to your hotel in a private vehicle. Night at the Palo Santo Hotel in Premium room (STD). 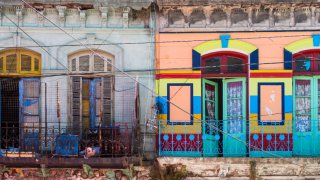 Night at the Palo Santo Hotel in Premium room (STD). 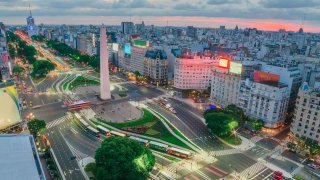 Transfer from the hotel to Ezeiza International Airport in a private vehicle. 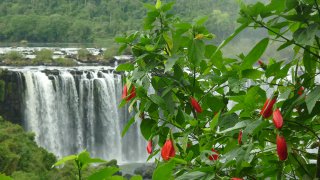 Check out other travel ideas in the theme "Our Roadtrips"